The Australian Radio Network has studios and offices in Sydney, Melbourne, Brisbane, Adelaide and Canberra. They employ almost 500 staff across the country.

The Australian Radio Network had been a long standing customer of Toshiba’s and approached them to talk about a solution that could transform the way ARN managed their printing and document management.

At the time, ARN’s print fleet consisted of 44 devices, with 15 different models from three different brands. This created a challenge when it came to managing costs and organising servicing. Graeme O’Connor, National Technology Manager at the Australian Radio Network, said "that in hindsight they didn't realise how inefficient their print management was". 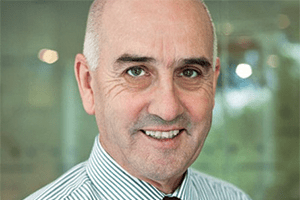 “We had been a client of Toshiba’s for over eight years and had a number of their multi-function devices within our print fleet. To be fair, I don’t think we really realised we had a problem, other than the fact that we didn’t have a handle on the costs involved in running multiple individual printers. Aside from the printers that we owned outright, we had several different contracts, all with varying costs, terms and completion dates,” said Graeme.

"Our positive existing relationship with Toshiba and their pledge to design a streamlined print service on one monthly bill, convinced me that it was worth looking into,”

Although ARN were not actively seeking a solution to their print needs at that point, their Toshiba Account Manager, Damian Davies knew that the multiple contracts, bills and varying costs were a bug-bear for Graeme. It was Damian’s suggestion that made ARN consider a Managed Print Service (MPS) solution.
“Damian asked if we would be interested in exploring an MPS arrangement and offered to conduct an audit on our current system. I have to admit that I was skeptical in the beginning because I had heard promises from many other companies over the years. In the end, our positive existing relationship with Toshiba and their pledge to design a streamlined print service on one monthly bill, convinced me that it was worth looking into,” said Graeme.
Toshiba installed print usage data collection software onto the Australian Radio Network server and monitored their usage over a two month period. Using this, together with contract information, they were able to gain some idea of the costs of the current system and their print needs for the new solution.
Damian Davies from Toshiba said that it was clear that ARN could benefit from a Managed Print Service.
“Our discovery process revealed that a number of their print devices were expensive to run, underutilised or out-dated, and confirmed that ARN were facing uncontrolled and uncontained costs in servicing their print fleet,” said Damian.

Having assessed their needs, Toshiba was able to create a bespoke solution for ARN to provide a one-stop-shop print service across the organisation, with a fixed monthly cost.

PaperCut software allows ARN to track and control printing within their organisation. It provides a way to define and enforce printing policies that can reduce costs, wastage and environmental impact, whilst providing reports on individual device usage and expenditure.

“We now receive monthly reports on the use of each device. It gives us a really good picture of our fleet and how it is being used. We can use this information to get an indication of what devices are needed at each location, so we can plan for shifts or changes in the future,” said Graeme.

Toshiba set up printing rules and policies for ARN within PaperCut, including default duplex and black and white printing, automatic deletion of duplicate jobs and auto energy save on devices. Find-Me printing was also incorporated at ARN, whereby staff must use a swipe card or log in at a device to release their print job.

This helps to reduce paper wastage because a document is not released until a staff member physically goes to collect it. It also allows staff the flexibility to collect their printing from any device on the network.

“The swipe to release has been a fantastic feature. Staff now have to think twice before printing something,” said Graeme.

“We saw a 40 percent reduction in paper usage. This was a fantastic result and said to me that this solution was working,”

Graeme says that ARN now have control over their print and document management expenditure and a greater insight into use across their organisation.

“I have gone from looking at a dozen variable bills each month, to one set bill including all devices. I am certainly pleased with that,” said Graeme.

However, Graeme insists that it goes much further than that, as the solution has had a positive affect across the entire organisation.

“Management are happy because they are seeing a reduction in costs. The first evidence we had of this was the volume of paper that we were ordering was significantly reduced. Through the PaperCut and Find-Me software integration, we saw a 40 percent reduction in paper usage. This was a fantastic result and said to me that this solution was working. Moreover, this reduction in paper use has had no impact on business operations, so we were saving money with no downside,” he said.

“The IT support team at ARN now spend less time fixing technical difficulties with the machines. This is partly because they are more reliable than the old fleet but also because now we have one contact point for the servicing and support of all devices,” he continued.

PaperCut has a feature that can show users the environmental aspects of their printing. Staff can now view their paper use in terms of CO2 produced and trees consumed.

“I think that it is also a positive thing that staff now have a greater awareness and appreciation for what is involved when they print something,” added Graeme.

The visibility and control that ARN now have, on what was previously an unknown, being an uncontrolled operational expenditure for the business, is significant.

Implementation is not the end of the story for ARN and their new business arrangement with Toshiba. As part of the MPS agreement, Toshiba and ARN have quarterly reviews to evaluate how the solution is working for ARN.

“The quarterly reviews are an ideal way to stay in touch with our account team at Toshiba and assess our Managed Print Service. It gives us an opportunity to analyse the monthly reports and discuss any tweaks to our solution, such as moving machines around and keeping up to date with the new ways Toshiba can support us through their service,” said Graeme.

Toshiba and ARN are now in discussions about potential work to improve ARN’s document management. Graeme says that he is confident in the future of the partnership.

“We have had a longstanding relationship with Toshiba and I think that speaks for itself. I have trust in Toshiba and their ability to deliver what they promise, manage the agreement and partnership, and their capacity to understand what is required for our business. The account management team have been very supportive and responsive to issues, they know our business, and if they hadn’t suggested MPS to us, we would not have gone down the path and reaped the benefits.”