E-Bisglobal is a managed service provider of print, marketing, warehousing and logistics.  They specialise in sourcing from a global portfolio of suppliers, through custom built applications and a team of industry experts who can identify and adjust to market developments. E-Bisglobal provides clients with no hassle, cost effective and reliable services that drive down costs and increase efficiency.
As managed service providers themselves, the team at E-Bisglobal understand the value of using expert resources for specialised tasks. They apply this to their own IT, by partnering with Toshiba for the provision of network and infrastructure support. 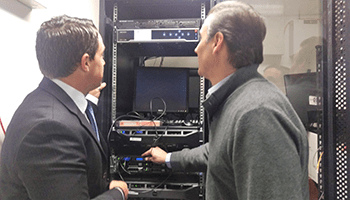 They had first engaged with Toshiba as a supplier of print services, and having been impressed with their expertise and knowing that they offered a wider portfolio, invited Account Manager Gavin Payne to bid to provide network support and monitoring. Gavin suggested starting with a full systems audit, especially as the former CIO had recently left the business, and a great deal of knowledge had inevitably gone with him.

The business had been through a growth period and systems had been put together rapidly to meet increasing demands, rather than to a strategic plan. The audit was a real eye-opener, according to E-Bisglobal CEO, Sean Havard.

“Toshiba were able to identify a number of issues that needed to be addressed and provided advice on the best way to move forward.” - Sean Harvard, CEO

Toshiba helped E-Bisglobal to prioritise the issues based on highest risk and actioned the most urgent, such as new servers to ensure capacity to support the business.  They were delighted with the outcome, but realised that they needed broader support as well. Sean explains “We have a Development Manager who focuses on our application environment, but did not have the skills in-house for our business-as-usual IT requirements.  We needed support for what I call ‘keeping the lights on’, for our general business IT systems”, he says.

Not having the scope to recruit IT resources, E-Bisglobal decided that partnership was the right approach to ensure their IT requirements were met.

Toshiba was invited to play a bigger role and now has responsibility for all infrastructure, including networks, backup and security, under the guidance of an E-Bisglobal IT Operations team leader.

Toshiba participates in monthly operation meetings to review performance progress and quarterly strategy meetings to plan future projects. One of these, for example, is to look at how to migrate E-Bisglobal’s offerings into the Cloud.

The partnership with Toshiba has had a very positive impact on the business. Sean gives some practical examples; “We’ve implemented a monitoring and alerts system, which has made us much more proactive, with redefined roles and responsibilities.

"Updating our business continuity system has had a big impact on our staff" - Sean Harvard, CEO.

Previously, if the warehouse staff came in at 7am and found a problem, their hands were tied until the IT team came in at 9am, and even then it could be a few more hours until the issue was fixed. Now, they know that they simply call Toshiba and the issue will be addressed immediately – so it’s had a big impact on productivity.

“Updating our business continuity system has had a big impact on our staff”, he continues, “as they no longer have to log out of the system every month end whilst backups to tape are made. The backup process now runs seamlessly in the background”. 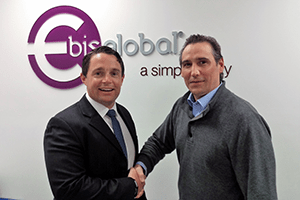 By switching the support model from internal to external, E-Bisglobal has also eliminated the key person dependency that they had previously, when a lot of essential information was in the head of one staff member.

“The new support model with Toshiba has given the IT team – in fact the whole company – a great deal of confidence”, says Sean. “We know we’re backed by a company with a great reputation, we have clearly identified our risks and know what we need to do to fix them. Yes, it’s still evolving, but we have a road map, whereas before we were a blank canvas”.

Sean has been delighted with the decision to partner with Toshiba. “They have become an integral part of our business”, he says.

If asked what he values most about working with Toshiba, Sean doesn’t hesitate: “Firstly, it’s the people”, says, “we have built very strong relationships with Gavin and the extended Toshiba team. Secondly, their professionalism is hands down the best I have come across. They react rapidly and I couldn’t ask for more.

And thirdly, it’s the sheer breadth of capability that we can now draw on. Whatever the subject, there’s someone in Toshiba who can help us, and Gavin can always find them. It’s like having a massive extended team with expert knowledge”.


E-Bisglobal knows a thing or two about Managed Services - and that goes not only for providing them, but for getting the best out of using them.