Since its inception in 1984 by philanthropist Dick Smith, the Variety Bash has raised over $173 million dollars to help our disadvantaged kids through Variety, the Children’s Charity. 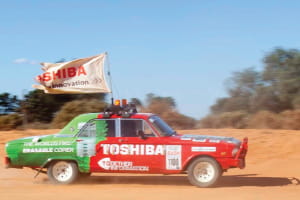 The original ‘Bash’ was started in NSW, however over the years as each State has obtained its own Tent (State Office) status they have also created their own ‘Bash’, and today, all 6 States and Territories are using this great tool for fund raising.

Each ‘Bash’ is a travelling community, so understandably we try to avoid each other during the year, however every 5 years we have The National Bash, where, at some point, all 6 Bashes meet up for a night of celebrating Variety.

This being the 30th year of the Bash, NSW was given the honour of organising to get 550 vehicles and 2,000 Bashers together in one place! Needless to say there were some significant hurdles to jump, not least being the reluctance (at first) of the RTA, NSW Police and the Centennial Park Trust to entertain the thought of all these vehicles clogging the transport corridors of Sydney on a Sunday, however when presented with the challenge an acceptable plan was formalised, and the spectacle of a constant stream of gaudily decorated vehicles crossing our great Sydney Harbour Bridge became a reality. The convoy eventually settled in Moore Park, and friends, relatives, the general public and many others had the chance to mingle with each other whilst viewing the cars.

The final night concert was a spectacular affair, compared by the very funny Vince Sorrenti with headline acts such as songstress Wendy Matthews, INXS Lead Singer Ciaran Gribbin, and a very strong supporting group who covered all the big hits like the real stars!

Governor General Sir Peter Cosgrove addressed the gathering, and had us laughing as hard as Vince Sorrenti, a great man and a great speech!

The big news of the night was the money raised by the collective Bashes over the year. The total was a tremendous $7.9 million dollars, and NSW contributed $2.2 million of this to make us the highest State fundraiser!

All together a great effort by all concerned and a huge injection of funds to an organisation dedicated to the kids!