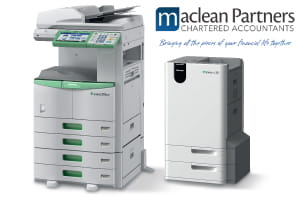 THE long-held notion of a paperless office might still be a myth, but that has not stopped Townsville accountancy firm Maclean Partners from trying to climb that mountain.

The business is the first in Australia to acquire Toshiba's new eco-friendly printer and paper re-using device, called an eSTUDIO306LP, which combined with the erasing unit allows the user to wipe words and images from the printed page so the paper can be re-used.

Maclean Partners tax adviser John Kerrisk said the acquisition was part of an innovation strategy they launched this year to drive efficiency and stay ahead of the pack.

"I don't think we can get rid of paper altogether but if we can re-use some, there is some cost saving for us," Mr Kerrisk said.

"Also, you've got to be innovative, otherwise you don't remain relevant."

Townsville Toshiba dealer Delta Office Solutions won the bragging rights for recording the first sale of an e-STUDIO306LP and e-STUDIORD30 in Australia.

Delta account manager Matthew Crause said having an established relationship with Maclean Partners, which is their accountant, helped seal the deal.

Townsville was the talk of the office supplies industry nation wide, he said.

"There has been quite a few (machines) sold now but Maclean Partners is the first commercial user in Australia," he said.

Mr Kerrisk said their new e-STUDIO was still something of a novelty but they were looking to reduce paper use by at least 50 per cent, providing a saving of around $250 a month.

The use of a heat-sensitive toner allows the toner to be de-coloured so the paper can be re-used up to five times.

Running paper through the re-using device saves the data, which can be directed to a particular file for storage, also cutting handling costs.

Mr Crause said the e-STUDIO eco-MFP retailed for around $10,000, comparable in cost to other photocopiers.

In other moves, Mr Kerrisk said they had scanned two container-loads of documents for digital storage and were looking to introduce Paper Buster software to produce electronic tax returns.

It was more convenient for clients, to send to the bank and retain in digital format, he said.