The history of barcodes

Integral to the world of packaging and print, barcodes identify what is selling and what is not.

Exactly when did we start to see these bars-and-spaces of information, and how did they come to be part of Australia’s print/pack scene? 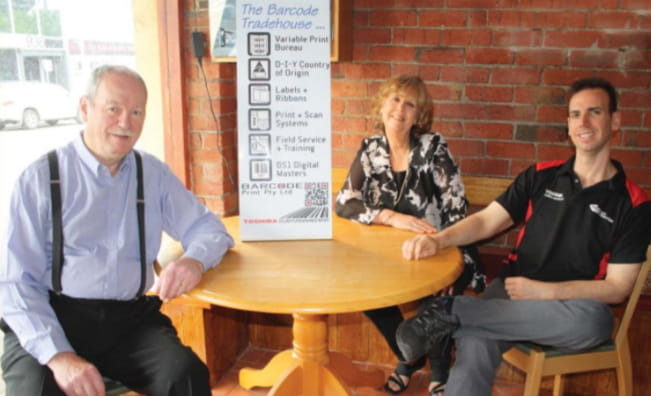 One man who was there at the beginning is Melbourne-based auto-ID specialist, Mr Vin Elder – known around the trade as “Mr Barcode”. Vin told Labels Plus that retail barcodes first appeared in Australia back in 1979. “They had been in North America for perhaps five years prior, but we were among the early adoptees,” explained Vin. “Leigh-Mardon was the leader in computer graphics field at that time, and I was selected to join their sales team early in 1979. They were part of British America Tobacco, and the equipment they had recently installed in Moorabbin was way ahead of its time; certainly a first for Australia. Part of their marketing plan was to be ready for the potential introduction of retail barcoding into Australia. The Grocery Merchants of Australia, Retail Traders’ Association and others, had formed the Australian Product Number Association [now operating as GS1 Australia] and had begun to canvass the retail world and its suppliers about the introduction of barcoding. As the only ex-tradesman (typesetting) on the sales team, I was charged with liaising with both the grocery manufacturers and printing industry in the technicalities of barcoding supermarket products. I also assisted in developing from scratch, Leigh-Mardon’s barcoding process. ‘How do you get a barcode onto a loaf of bread?’ Within a few months we had about 97% of the market.

The introduction of barcoding was initially for the benefit of the retailer, he said, eliminating large back-room inventory and enabling a ‘just-in-time’ supply cycle. “Barcodes gave retailers instant feedback and extremely accurate sales data.”

Modern management, bright young programmers, keen tradesmen, top-class equipment… it all added-up to Leigh-Mardon team being very proud of their barcode product. From ’79 onwards, we had opportunities you would never have expected. I remember saying at the time, that this new process would keep me busy for about three years, but I was wrong. It went off like a rocket and took me all around the world training the printing/packaging industry in counties like New Zealand, South Africa, Hong Kong and Singapore.

Leigh-Mardon was producing barcode film masters; an 80mm square of film, which had to have an accuracy of +/- 5 microns, and we were achieving a +/- 2.5 microns. It was extremely exacting and we spent hours and hours in measuring laboratories perfecting the methodology. Scanning systems in 1979 were not as smart as today; everything had to be as ‘within-spec’ as possible.”

Recognising that the future of barcodes was guaranteed, Vin eventually moved on and started his own business in 1983, called Barcode Information Graphics. He commented that it was jokingly referred to as ‘Barcode Education Graphics’, because those who joined the company had to be trained from scratch. The original company has morphed into Barcode Print Pty Ltd, Platinum Dealers for Toshiba thermal transfer printing systems.

Every barcode (usually) carries a unique number allocated by GS1 to that particular manufacturer, plus a three-digit product code,” he explained. “That’s all there is to it. The GS1-13 number is entered into a retailer’s database for a particular product pack size (eg: 150g), and matched against current price in the database. Similar to the international phone system, each country within the GS1 system utilises a ‘Country Flag’ (eg: ‘93’ Australia, ‘94’ New Zealand, ‘40’ Germany, etc.).

The introduction of barcoding was initially for the benefit of the retailer, he said, eliminating large back-room inventory and enabling a ‘just-in-time’ supply cycle. “Barcodes gave retailers instant feedback and extremely accurate sales data.

IBM came up with the successful barcode option in the early ‘70s, and once shown to Grocery Merchants USA, was rapturously endorsed by the trade; this “retailer secret” quickly became common knowledge.

It was brilliantly simple,” said Vin. “The barcode is constructed with a unique left and right ‘zone’ – two codes within one. No matter if the product is ‘frisbied’ across a supermarket scanner, the barcode is always decoded left/right, right/left. The zones are reflectively opposite, and can never be misinterpreted; literally an ‘ebony and ivory’ pair within one barcode. To add to the scanned accuracy, there’s a check-digit.

“A large part of our business is selling consumables, labels and thermal ribbons Australia-wide. We don’t convert labels ourselves, but have a string of suppliers who we trust..."

The Americans initially came up with a 12-digit Uniform Product Code number. The potential major European markets calculated that this number range would quickly be over-reached, given the expected international usage. The problem was quickly solved by implying a 13th number at the front of the existing 12 digits by the use of a variable parity (eg: Australia’s ‘9’ out the front is implied by the variable parity ABBABA applied to first six digits”. Thus was born the international barcoding system, now GS1.

Vin commented that business interest was still ongoing as companies readily saw the advantage of complying with retailers’ demand for barcoded product. “We still have companies asking ‘how does this work?’ And we patiently support anyone trying to get into barcoding. We spend the time because we know they’ll be back.

Discussing wider developments, Vin advised that the concept had graduated from product barcodes to carton barcodes (Trade Units), and had expanded onwards to the trading-cycle barcode (GS1 Application Identifier Standard). The key element of the Application Identifier Standard is the Serial Shipper Container Code (thankfully referred to as the SSCC label). SSCC labels are literally unique “number plates” for each pallet travelling through the trading cycle, enabling traceability, in case of faulty product. Use-by date, batch number, weight, etc., is covered within this system.

It’s been up and running worldwide now for around 15 years and is at a point where the Application Identifier Standard is beginning to be utilised by all transport services (couriers, post, etc.).

Vin said Barcode Print, operating as a long-established trade house, offers services to label converters and manufacturers. “Variable print, sequential numbering – that sort of thing. We’ve recently done a big job using a check-digit algorithm for a large Australian manufacturer that apparently others couldn’t work out. My stepson Rod is working in the business and I believe the combination of my older, experienced head and his young agile mind makes for a great partnership. He’s a certified Microsoft computer engineer.

A large part of our business is selling consumables, labels and thermal ribbons Australia-wide. We don’t convert labels ourselves, but have a string of suppliers who wet trust. We source thermal transfer ribbons from our principal and Foilmakers, who have been reliably supplying us since the 1980.

Barcode Print also undertakes field service and training for the Toshiba thermal transfer printing systems we sell. We like to say there isn’t a salesman in the building. We’re technicians. Behind every system we install is 35 years of experience and service. We’re across new technology and compliance standards, but we’re also aware that it’s the service behind what we sell that sets us apart. And that’s something you can’t buy off the shelf.