Toshiba Dealer of the Year Awards 2019

General Manager, Bret Davies, acknowledged both the Category Winners and overall Australasian Dealer of the Year at this year’s Gala Dinner and noted, “The achievements of our Dealer Partners over the last 12 months has been notable and a major factor in our growth of units sales and revenue, in what is often seen as a flat and mature market”.

He added, “Due to this growth in business, this year’s winners have done particularly well as there were several Dealers in each category, who were all vying for top spot”.

Awards were received for exceeding their budget and going above and beyond in service to the customer.

Australasian Dealer of the Year

The winner of the prestigious overall category winner, Toshiba’s Australasian Dealer of the Year this year was Winc Tasmania.

Winc Tasmania started their journey with Toshiba back in 1983 as Burnie Business Machines but have been through many changes over the years, not only in name.

“The team at Winc Tasmania continue go from strength to strength and demonstrated their ability to secure both SME and Large Enterprise Accounts, which in this flat and differentiated market is great,” he added.

In response, Tony Hawkins of Winc Regional Manager MPS Tasmania, thanked Toshiba for their support in achieving such a great result.

“The Dealer Vendor relationship is a key plank of good business, and the spirit of partnership to allow us both to achieve success is what drives these results,” said Tony.

“It’s great recognition for the last 12 months of hard work that the whole Tasmanian MPS team has contributed to. A big thank you to all.”

“We at Winc Tasmania look forward to our ongoing and continued success partnering with Toshiba in the year and years ahead,” he added.

Winc Tasmania, a big supporter of local communities, were also commended for their charitable work throughout the year. These included donations of scholarships for the UTAS Foundation and the Menzies Research Institute to name a few.

The principals at Darwin Office Technology (DOT), Tim Curran and Chantrelle Carey, have both been working tirelessly over the last 12 months, resulting in being recognised as Platinum Dealer of the Year.

With the challenges of working in the Territory other than the heat, the Northern Territory’s DOT has had significant wins including a multinational that decided to go against the global procurement mandate and partner with a local dealer with another brand.

“Thinking outside the square and highlighting the excellent level of service in the most remote of areas, it gives me great pleasure in awarding Darwin Office Technology, Tim and Chantrelle, the Platinum Dealer of the Year Award,” announced Mr Tharmakumar on the evening. 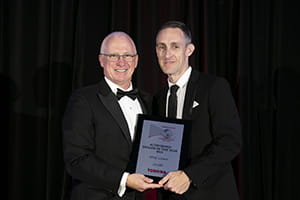 Winc Lismore, one of Toshiba’s longest serving dealers, this year took out the Authorised Dealer of the Year Award.

"Congratulations to Kevin Langley and the team on the outstanding year they’ve had" said Hari Tharmakumar. He went on to praise Winc Account Manager, Rod Latimer, who accepted the award on the night.

"It’s been 3 years since Rod made the leap from technical to sales and he hasn’t looked back and the results show what a tremendous job he is doing" Hari added.

In response, Kevin Langley, Regional MPS Manager, said how proud he was to receive the award.

“It recognises the great work by our team over the past 12 months and our increasing involvement in Solutions selling. We are continuing to work on Solutions selling as we see this as the future of Managed Print Services”

Winc Lismore were also commended on their work with local groups and charities in their community. These include Marist Bros Ruby League club, Local Lions World of Magic, Special Children's Christmas party and Immune Deficiencies Foundation of Australia.

Barcode Dealer of the Year - Stratix 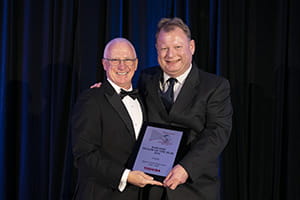 Barcode printing is a major growth area in the world of printing and Toshiba is a world leader in the field.

Receiving the Barcode Dealer of the Year Award this year is one of Toshiba’s most valued Platinum partners. Stratix has been actively working with Toshiba to increase their hardware growth and re-align their partnership to work even closer with Toshiba.

“It was a tight race between our dealers for the top spot in barcode printing, but the result of highest growth over the 12 months has allowed this Barcode Dealer to demonstrate the trust and commitment Toshiba has shown to the channel. Congratulations Stratix on winning the Barcode Dealer of the year 2018-2019,” said Hari.

“Congratulations to all our winners for their tremendous achievements in 2019 and for exemplifying what it means to be a great Toshiba dealer,” said Hari Tharmakumar, National Channel Manager, Electronic Imaging Division, Toshiba (Australia) Pty Limited.

“Persistence and hard work are inseparable. One can’t live without the other," he concluded.

The Toshiba Dealer of the Year Awards (DOTYs) celebrate a world where efficiency and innovation are recognised as the most powerful forces of print and document management.

The 2019 DOTY Awards are all about championing customer service and celebrating work that demonstrates the power of these forces to deliver effectiveness.
To win one of these coveted awards, the dealership must demonstrate that it had a truly strategic and creative solution to meet customer challenges and brought in exceptional results.